In this metallurgical case study, we present a heap injection project, similar to hydraulic fracturing, that was completed at the Cripple Creek and Victor (CC&V) gold mine, located in central Colorado. At CC&V, gold is produced from a valley fill leach pad, stacked from crushed ore mined from an open pit operation. After stacking, an aqueous barren solution of sodium cyanide is applied at the surface, which percolates through the rock to preferentially dissolve the gold. The leach pad is underlain by an impermeable (and electrically insulating) liner to collect the gold-laden pregnant leach solution, which is pumped to the processing plant to extract and refine the gold for market. The barren solution is then recirculated back to the top of the leach pad to repeat the cycle. Due to the height of the pad, in excess of 600ft in places, it can take up to six months for the solution to complete this cycle.

The leach pad was constructed over several decades by end dumping ore from large dump trucks. The ore was stacked in a series of lifts, each upwards of 100 ft in height. As a result of the dumping, the topography is highly variable and steep in many areas. Early in the heap’s construction, the material was dumped fairly uniformly in thick sequences above the liner. At later times, the dumping created steep inclines towards the west, all of which may contribute to how leaching solution moves downward through the pile. Heap structure is a component affecting moisture movement within heaps.

Heap structure affects how leach solution percolates through the ore and to the liner. It is often impeded by low permeability material. This metallurgical case study presents a method to increase permeability by secondary metal extraction, which is similar to hydraulic fracturing.

In 2011, injection wells were installed within the heap for secondary metal extraction. The injection wells were especially useful for regions deep within the leach pad, where changes made to the application of surface irrigation had no significant influence on flow patterns or geochemical conditions nearer the liner. The injection wells were located along benches for easy access, approximately 120ft apart, and drilled to depths to within 100 ft of the liner. Barren solution comprising sodium cyanide was injected through a high capacity pumping skid in a series of packed zones, starting at the bottom of the well (270ft), and progressing upwards at 20ft intervals until a safe distance from the surface was reached. Typical injection scenarios included four hours of pumping at 800gpm at 250psi, which is lower than most hydraulic fracturing operations for unconventional oil and gas extraction. However, some zones were injected for eight hours to test the effect of injection time on recovery, or at lower pressures to gain an appreciation for the effectiveness of the highly pressurized injections. A total of 10 zones were injected over a period of eight days.

The injections for the secondary metal extraction were monitored with HGI’s Geotection resistivity monitoring system, a 180-channel measurement system that acquired a snapshot of changing subsurface conditions every 15 minutes. The results of the resistivity monitoring showed that the solution would typically cover a radius of about 40ft in the deeper zones, but extend out to 120ft for the upper during injection. The figure below shows resistivity data from Geotection on the 110ft injection zone, where leach solution was pushed towards the north. Historical topography indicates that the heap sloped towards the north, which may be the reason for the solution to migrate in that direction. 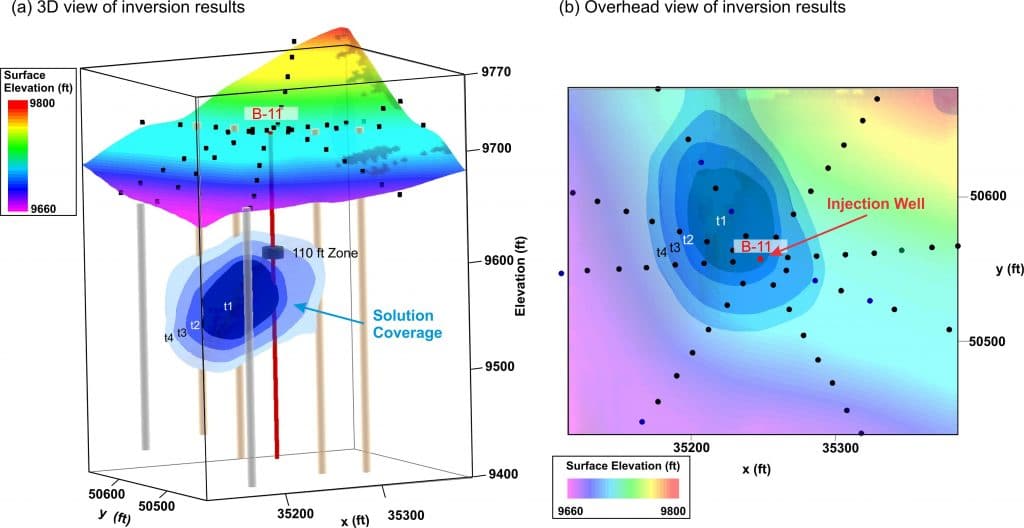 Geophysical monitoring results for mapping leach solution during injection at the 110ft depth.

HGI’s unique set of tools and knowledge of fluid movement in rock piles helped to make for a very successful secondary metal extraction project. In the end, HGI was able to provide the metallurgists at CC&V with optimized operating parameters that helped them to reduce costs and maximize gold production. Well spacing and injection duration were two parameters in particular that were changed after the monitoring project. CC&V personnel were pleased with the results and have asked us out again to evaluate the capabilities for a new pump skid that can push well over 2000 gpm.