Gold Mine in North America

The following geophysical case study presents an electrical resistivity characterization effort by HGI at a gold mine in North America. The heap leach pad at this gold mine was suffering from the effects of solution pooling, likely attributed to compacted material at depth. The resistivity characterization included 2D acquisition along perpendicular lines and 3D modeling.

HGI embarked on a large 3D resistivity survey of a conveyer stacked gold heap to investigate issues of solution pooling at the surface due to compaction at depth. Compaction and pooling is common in heaps if the ore grain size is too fine.

The difficulty of efficiently leaching a heap is the tendency of finegrained material to compact and consolidate into confining layers. Solution pooling is created when leachate accumulates above the confining layer, where the hydraulic conductivity is sufficiently low that percolation through the layer occurs over very large time scales. The pooling will then cause additional leachate to flow around the pooled solution and create a shading effect immediately below the confining layer. The shaded zone remains relatively dry, thereby reducing the total volume of leached ore. Large confining zones of the type just described will reduce the overall effectiveness of metal extraction.

A large scale characterization survey was conducted on the leach pad, where HGI collected 33 lines of resistivity that covered an area of 40 acres. Following acquisition, the data were inverse modeled to form a spatial representation of resistivity at every point within the heap, where low resistivity values were associated with high moisture and high resistivity values were associated with low moisture. The most realistic model possible was built by incorporating the surface topography and depth to the HDPE liner.

By applying geophysical methodologies, HGI can give new insight in helping mining operators understand the role of solution management and mitigate common problems such as solution pooling.

2D horizontal slices and vertical were extracted from the 3D model at various depths and locations. The resulting plots below show the internal structure of the pad. The lowest resistivity values were observed directly at the locations of solution pooling, and two are highlighted in the figure. For the northern (top) pool, the resistivity remained low even in deeper portions of the pad and the 18m (60ft) slice shows a narrow low resistivity channel associated with the elevated saturation. The pool to the south has only a slightly elevated conductivity (or lowered resistivity) at the 60ft depth and the area around it appears more diffusely saturated. Its proximity to the retention ponds likely alleviated some of the more serious problems that could have occurred. Immediately adjacent to the surface pools are high resistivity areas, perhaps due to a lower pressure in the line, and hence lower application rate at those spots. 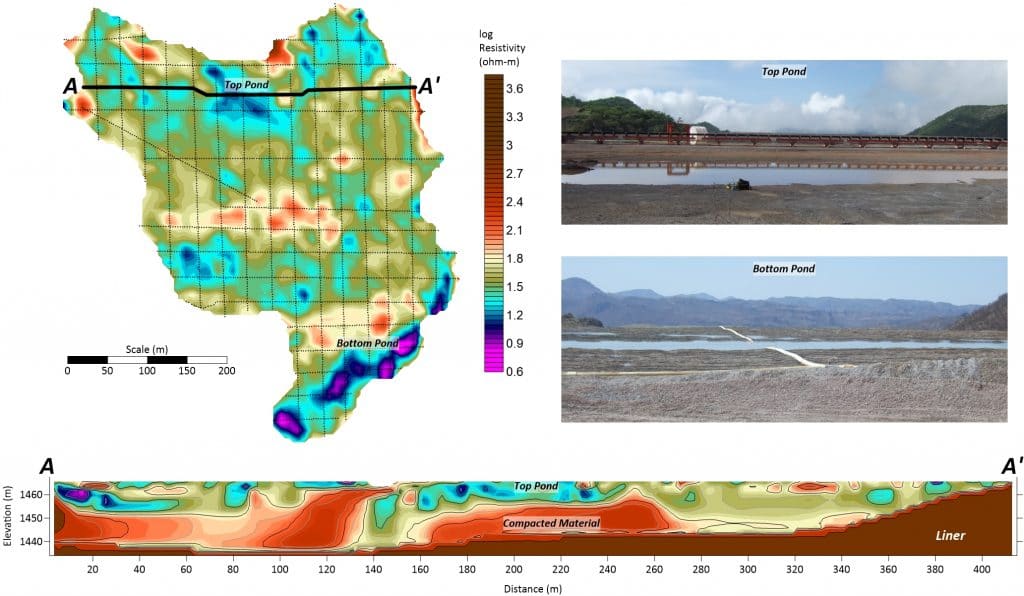 By applying geophysical methodologies, HGI can give new insight in helping mining operators understand the role of solution management. Comprehensive resistivity characterization surveys on heap leach pads offer a unique set of tools and knowledge of fluid movement helping to reducing reagent costs, lower water usage, decrease slope failure risk, and most importantly increase PLS grade. HGI continues to work together with mining companies around the world to evaluate and increase the capabilities of new and exciting geophysical technologies